I laughed hysterically when I opened an Influenster product review box and saw a hair towel with the price range $30 to $50 listed. For one towel? My entire bathroom towel set was less than $50! The product, along with others, were sent over complimentary for review purposes. I remember calling it bullshit.

But bullshit can make for fun-to-read content, so I decided to try it out anyway. 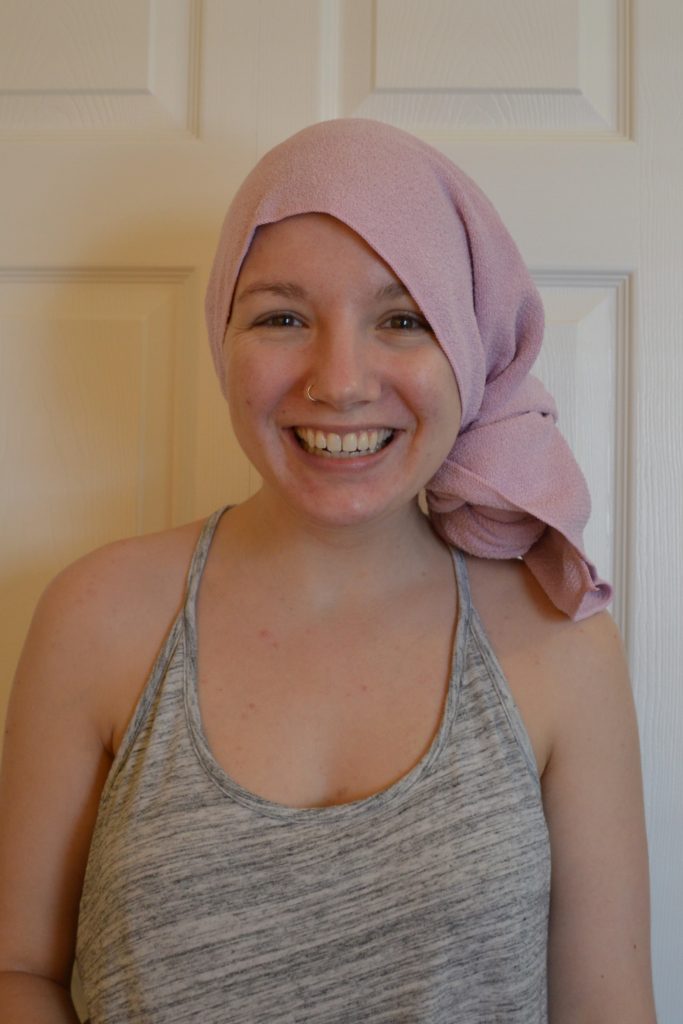 And damn it, if I wasn’t… Well, just keep reading.

First of all, let’s meet the product I wanted to hate: the Aquis Lissue Luxe hair towel. This $30 product is “…made with AQUITEX, an innovative fabric woven from ultra-fine fibers to create a lightweight material with superior water wicking capabilities that is gentle on your hair” and reportedly will… “dry strands 5x faster than cotton towels with less friction to minimize frizz and damage.” Hm. That’s a lot of problems to fix. 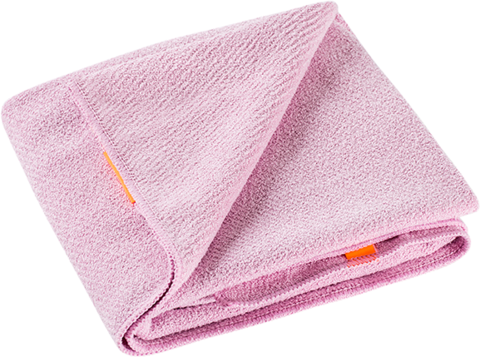 So how do I normally dry my hair? I start with whatever cheap towel I’m using on my body. Like I assume you do as well, I plop it on my head and pull it down the back of my hair, wringing out water as I go and rubbing/scrunching it at the top. Then I wrap my hair in this microfiber hair wrap towel I found in a two-pack at Target on clearance a while back for five or so bucks. Honestly, I don’t use these because I think they do a better job, but because it is physically easier to keep it on your head than a full-sized bath towel. I let that stay on as long as possible because I’m lazy and don’t want to deal with my now-wet hair; if I’m going somewhere, that normally means I’ll blow dry it with a round brush about 30 minutes later, but since I work from home more often than not it stays in the wrap until I get annoyed with the weight, and then just air dries.

For these tests, I followed my normal product routine and took images of it wrapped, immediately after unwrapping it, and after it was dry. I also clearly was uncomfortable taking my photo makeup-free and couldn’t keep a straight face.

ON TO THE EXPERIMENT! 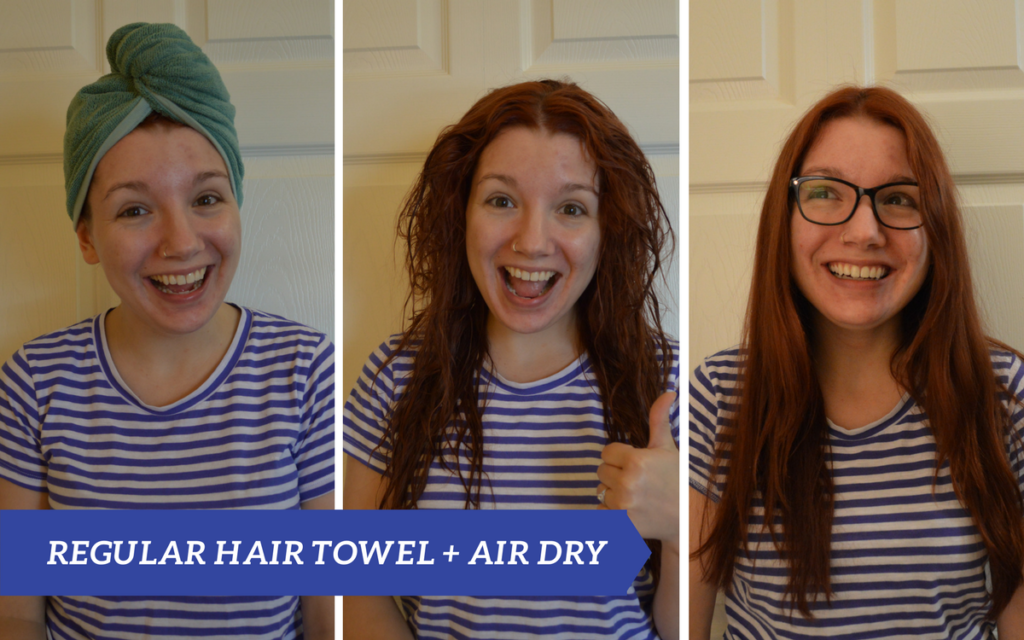 Day one and I already screwed up. I meant to check my hair after 30 minutes and make this the blow dry day, but I could tell it was still soaking wet so I started working on something else. Then I got distracted and 90 more minutes had passed. Whoops. I guess we’ll start with air drying.

So, after two hours I took off the hair wrap and it was still pretty wet – note I’m saying wet and not damp. It was still drippy.

I continued with my hair routine as usual: a pea-sized amount of Kevin Murphy’s SMOOTH.AGAIN and four squirts of It’s A 10 Leave-In Treatment, then brushing it through with a wet brush.

Four and a half hours later I’d say my hair was totally dry. The pieces around my face, as always, got a little weird and the ends were somehow frizzy and flat. Shouldn’t it be one or the other? 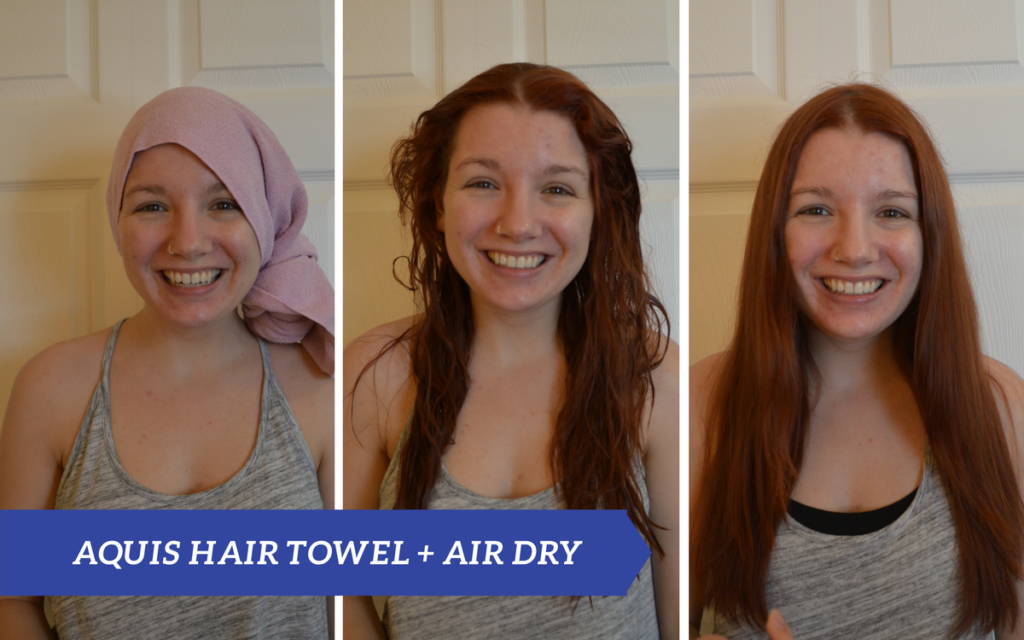 Less than an hour in and the towel feels wet, heavy, and like it’s falling off my head. It was hard to wrap it in place, but I think part of the issue there is that I was sent a standard length when I need the longer version. That isn’t the towel’s fault so I’ll try not to blame it.

After two hours, my hair is still nearly wet – it isn’t as wet as it was with my other towel, but for this price I was expecting it to be merely damp at this point. Admittedly, my hair is less frizzy feeling and easier to brush through when I take the towel off. The tangles are less extreme and it doesn’t have the stuck-my-hand-in-a-socket look my hair normally has at this point. That’s promising.

About 45 minutes later (so 2.75 hours total) my hair was dry, shiny, and frizz free. Damn it. This thing seems to work. Like really well. 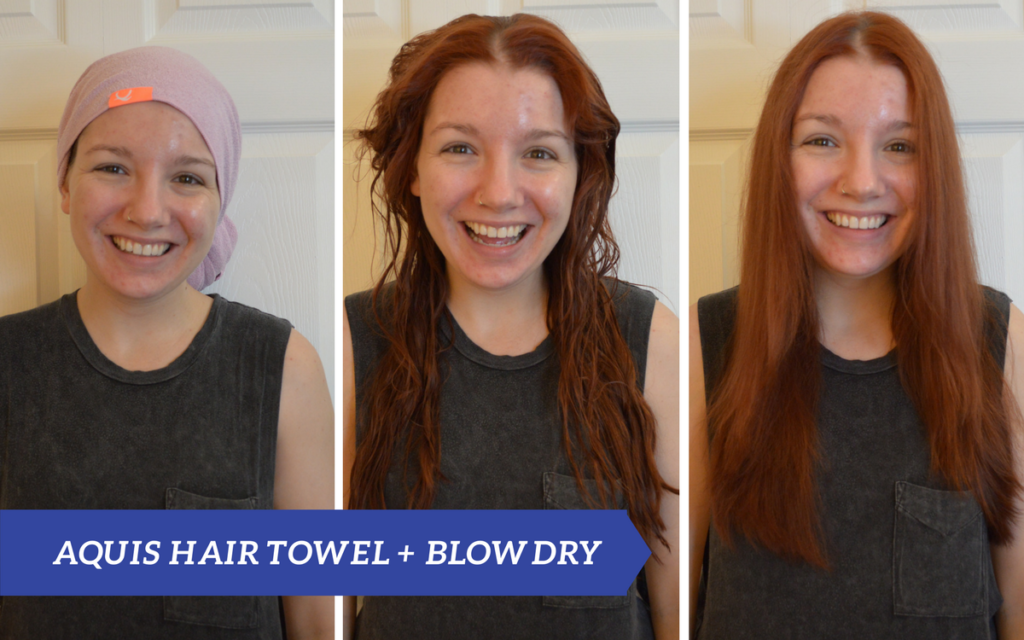 By this point, I’m a little better at keeping this towel on my head but wrapping it is still mildly complicated. I was in a bit of a hurry, so I wrapped my hair up for 30 minutes and then blew it dry. The end results were pretty normal: shiny, frizz free, and a little more bouncy. The surprising part came in the time. My hair was dry within 4.5 minutes of blow drying. FOUR AND A HALF MINUTES. These results seemed so good compared to the 15+ I feel it normally takes. But… I’ve never timed it before. Better test that before deciding if this is good. 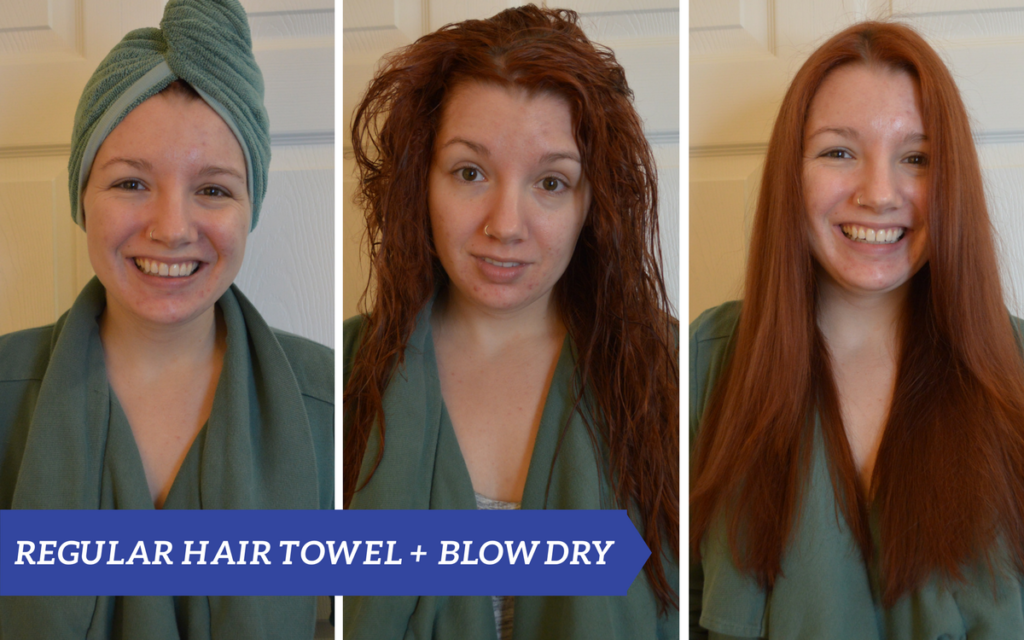 I’m getting pretty sick of the tangled towel mess now that I know it isn’t necessary, hence my expression in the second image. So. Much. Combinggggg.

In my opinion, the final result is identical to the expensive towel, and the dry time rang in at 6.5 minutes with the blow dryer. Hmm. Apparently I just hate doing it so much it feels like longer every day.

The only notable difference was between my air drying results. See? 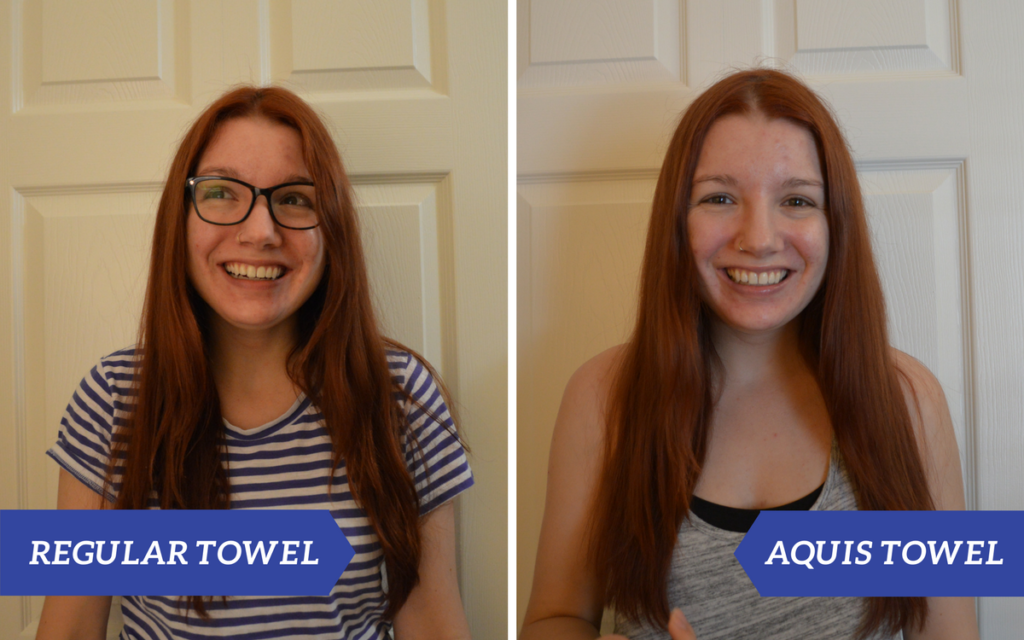 I can’t deny the version on the right was softer, smoother, and easier to manage. The photos speak for themselves. The blow dried versions, however, had no significant differences. Two fewer minutes to dry, even when the original times are so low, is not high enough to practically matter in my hair care routine. Aquis helped my hair in tons of ways, but it did not live up to every claim listed on the package.

Is Aquis Worth It?

I want to say no but I can’t. While I cannot speak for all, of even most, hair types, the Aquis Lisse Luxe towel helped my long, straight, frizz-prone, color-treated hair tremendously in the areas of air drying and tangles. After switching to it, I can’t stand going back to normal towels while traveling or when this is in the wash. I’ll probably buy a second one soon, and I’ll make fun of myself the entire time because this is painfully extra, but my hair will look great while I do so.