People say all kinds of nice things to you when you’re engaged. “Congratulations!” “Good for you!” “You’ll make a lovely bride!” You get the idea.

But in case you’re not engaged or married, here’s some weird news you might not have expected: People also say some really rude shit about your wedding while you’re planning it.

After the first rude comment about my wedding, I was a bit perplexed. By the ninth or tenth, I was pissed. I talked to some engaged or married friends to find out what staggeringly-thoughtless comments they have heard, and it turns out, this is a pretty common occurrence. Yes, some comments can be harmless depending on person and tone, and many are likely intended to be helpful instead of hurtful, but clearly there’s a fraction of folks who just don’t know when to shut the hell up.

In case you don’t know what is and is not acceptable to say, I rounded up the best bride-to-be insults in a handy list you can consult before deciding to speak. (Unless you’re trying to sound like an asshole. If that’s your goal, you’re doing a great job with these jabs.) 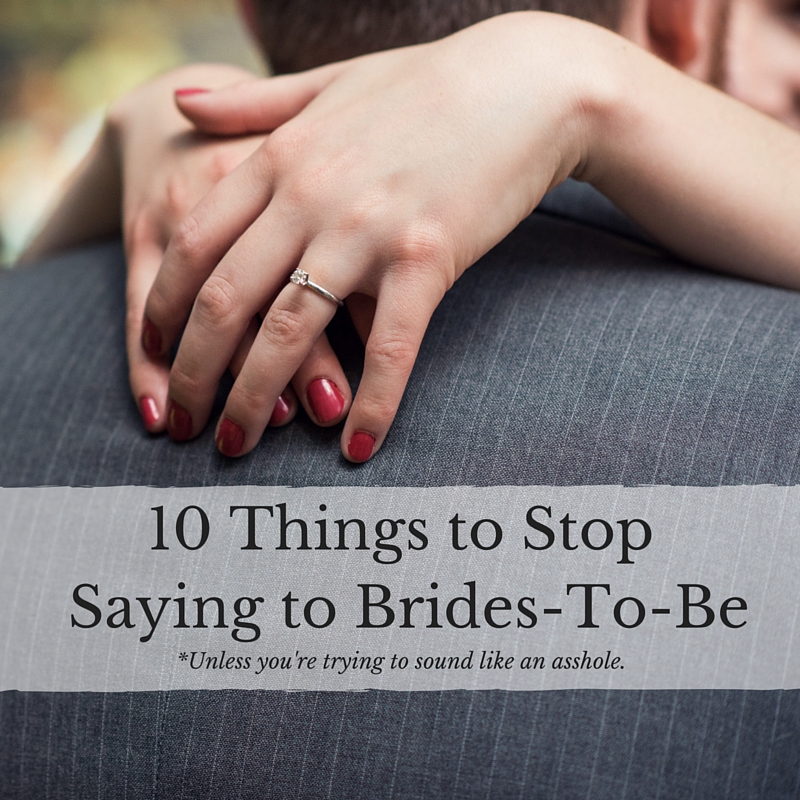 10. “You didn’t register for china/silver/crystal? We use ours alllllll the time.”

I never know how I am supposed to respond to this one. Cool? You live a fancier life than I do? You have more patience for hand-washing dishes than we ever will? If you really want to buy a couple silver or crystal or china, do it — but if they didn’t register for it, don’t be surprised when it gets thrown into the dishwasher.

9. “You’re not going overseas for your honeymoon? We went to [somewhere very far away.]”

This one surprised me; I didn’t expect people to express unsolicited opinions all over my honeymoon, because people normally don’t shit-talk others’ vacations. I get that you are disappointed for me with (what you think are) good intentions, but sometimes people pick different things than you would, and that’s okay.

If someone says they are taking a honeymoon you find to be subpar, let me feed you your line: “How fun!” The. End.

8. “How is it a wedding without [insert cultural or religious tradition here]?”

Ah dang, here we go with this one. You and I don’t have to define weddings the same way, because you aren’t part of my wedding. Just like you wouldn’t dream of saying, “Your wedding is in French? How is it even a wedding if it isn’t in English?” you shouldn’t ask how it’s a wedding without your particular traditions.

I won’t start on the fact that everyone should be on a budget and will instead move forward to the simple truth that if it isn’t your wedding, you don’t get to publicly whine about the price. If you think the food will be beneath your exquisite palate, keep it to yourself and be sure to gift the couple the most expensive kitchen items — yes, plural, get them the standing mixer and the fancy blender, ya snob — on their registry; clearly they need your fancy-pants help.

6. “We would never spend that much on a wedding.”

Cool story, bro. We’re super lucky you’re not footing the bill. Maybe we’ll save money and not invite you.

5. “You’re registering there? Don’t you think it’s a little cheap/expensive?”

Let me rephrase your sentence: “You know that place you clearly like? I don’t like it, and you should feel bad for liking it.” Rude much? If you want to spend more or less, pick out your own gift not on the registry. It’s a gift — short of bringing a turd wrapped in a bow, you really can’t mess it up.

This exact line has been uttered to me many times after someone learns we’re using silk flowers. Somehow they always repeat it back as fake flowers. Funny how that works.

I’ve had my nose ring for 10+ years, so I was shocked when people who have never known me without it brought this up. Think about it this way: Would you ever utter, “You’re not going to wear that haircut to your wedding, are you?” It’s sort of the same, and you’re a dick if you say it.

Unless this is followed with, “You’re marrying a Chiefs fan but you love the Broncos! OMG CRAZY!” you better shut your face before your finish your sentence.

Manners be damned; the appropriate response here is likely, “Oh, I didn’t see myself on speaking terms with someone that rude.” or, in fewer words, “Eat shit.”

1. “Your ring is so small! Don’t worry, you can get a better one when he gets a better job.”

Hahahahaha. It sounds like I made that up, because it is so comically, stupidly rude. But alas, leave it to people to always surprise you. If you see something you wouldn’t like, it can be easy to assume the person who has it also doesn’t like it. For example, if someone drives an old, seen-better-days kind of car, you might assume they wish they had something new because you would wish you had something new. I get it; you imagine yourself in the other’s situation, which normally is a good thing. You sort of tried. However, someone might love that old, beat-up car. Maybe it was the last year for that car, and it was an intentional purchase. Maybe there is sentimental value. Maybe they wanted to buy a bitchin’ new boat and don’t give two shits about the car. Maybe you shouldn’t assume the worst unless the person says, “I wish I had a new, better car.”

But maybe you still cannot imagine what to say when people like something you think sucks. Remember this: Seeing someone’s baby and seeing someone’s engagement ring can be dealt with using the same sound-effect response. “Aww.” Then shut that shit down if you’ve got nothing nice to say.

Engaged? Married? Tell me about all the unsolicited rudeness of others in the comments and we can make fun of it together!