I’ve mentioned I love– LOVE!– Android, no? My little Droid is a great phone, and the Google Play Market brings some amazing applications to the table. Assuming you’ve already downloaded the 5 Apps I mentioned your Android already wanting, here are a few others. After a week of use, you won’t know what you (or your Droid) did without them.

Go forth and download, Android addicts! Let your Droid rejoice!

Best Of… | We on the Android market (and presumably iPhone, but I don’t have that so I don’t know… or care, tee hee) have got a lot of free applications telling us which [enter one category here] are best, but why not see all the bests in one place? Voice Voice media (a.k.a. probably the owner of your city’s alternative weekly newspaper should you have one, a.k.a. the media conglomerate formed after the initial newspaper creation of one Norman Mailer [and others], a.k.a. the topic for one of my last projects in college) has collected the bests and presents them easily to you through free phone applications for major cities nationwide. 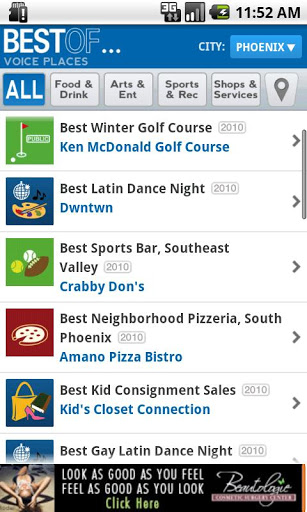 Because it’s Voice Media, this app doesn’t limit itself to standard categories. Things like “Best Yarn Shop”, “Best Bar Bathroom”, “Best Breakfast with a Hangover”, “Best Sex Shop”, “Best Breakfast After a One-Night Stand”, “Best Place to Play Pinball” and “Best Hipster Bar” are all included with recommendations. Should you find yourself in need of yarn, hungry for breakfast with your awful one-nighter and desperately seeking a proper bar to pee in, this app could literally save your ass. Don’t say I didn’t warn you.

Really, how can I talk about the best of the Android market without mentioning Best Of…? Bad joke, whatever. It’s seriously an awesome addition to your phone and city lifestyle.

Scramble With Friends | Hi, my name is Julia and I am addicted to Scramble with Friends. (Hi, Julia). 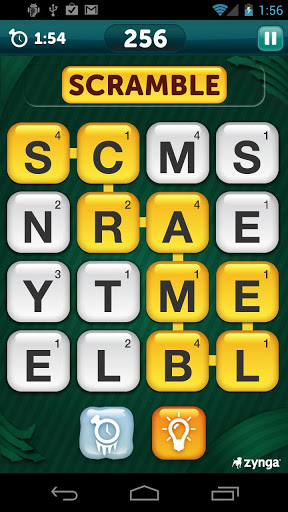 This Zynga game brings all the fun of a word search and combines it with a short timer, competition and desperate attempt to spell. You have two minutes to create as many words as possible (worth the most points by using the highest value of letter, the same way as Words with Friends) that can be created without lifting your finger from the screen. Addictive.

If your friends are beating you terribly, get some power-ups like freeze, which freezes the clock, or vision, which tells you three words you missed. Just make sure you don’t use up all your free tokens; it costs one token to play and, while the first power-up is free, the second is one token and the third is three per game. With free users earning tokens every 20 minutes and paid (99 cents in the Google Play Android App market, so worth it) every 10 minutes, they can go quickly. Use them wisely, as it’s amazing how much you’ll want to play again once you’re out.

StudyDroid | While this application isn’t currently of any use to me, it was a life saver in college. Students, beware: eventually your paper flashcards will get wet/blow away/get lost/rip and you will be livid. Be safe rather than sorry and start using digital ones on your laptop and Android smartphone.

StudyDroid is a simple, free application: you create flashcards with text and/or images on the app or website and they sync together. The cards “flip” and can be marked and moved to the end once they’re known. To move to the next card simply drag your finger like you would in a digital photo album. Could it be better?

CVS & Walgreens | Well, really it’s CVS or Walgreens, whichever one is your favorite. Personally, I love me some CVS but I live much, much closer to Walgreens. They run different sales, though, so I keep tabs with both. (As should you, if you like to pay the cheapest for staples like tissues and paper towels! Sorry, coupon-ing rant.) 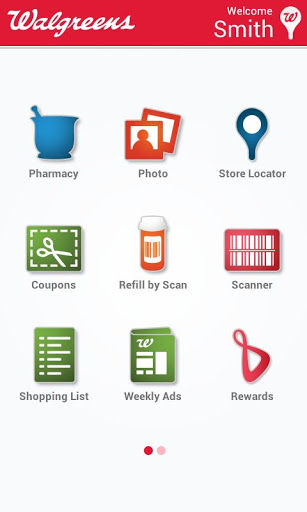 Both the CVS and Walgreens apps are truly a drugstore on your phone. Whether it’s used as a speedy way to find a 24/7 location or to take advantage of mobile-only deals, they’re helpful freebies to have. Both Android apps also feature a “print from phone” category, in which you can send images from your phone straight to the store. I’ve taken advantage of this and was surprised by the quality of my phone’s camera. Plus, it was beyond easy. No memory cards to plug in, no websites to attach to… just send it from the camera itself. 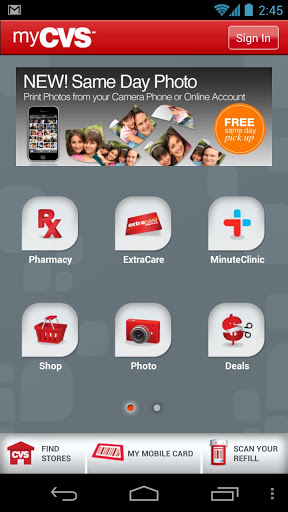 What sets these apps apart from others like Target is the refill by scan feature. Simply find your prescription and use the included bar code reader to scan it with your phone’s camera. It takes me all of 20 seconds to log in and refill my prescriptions.

CVS has recently upped their game– and possibly set themselves apart from the Walgreens app– with their new Pill Identifier feature. You enter the markings on the pill, the color and the shape and a list of possibilities with photos appears. I tried it out using generic ibuprofen and the application was right on the money. Really a great new feature, CVS.

NightStand BOLD | This application is pretty self-explanatory: it’s a clock that glows lightly on your nightstand in case you wake up and want to see the time. It even lists what time your alarm is set for, which is great for those who never think its set and check it a million times. (Guilty.) 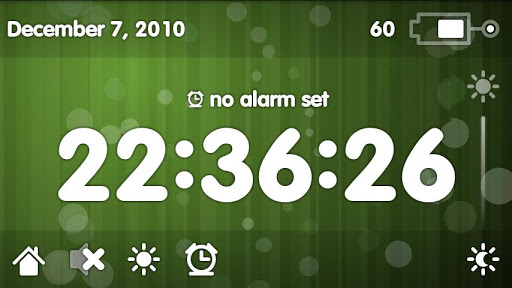 The color, time style, background, pattern, orientation and brightness can all be individualized to create the nightstand clock perfect for you. See the floating dots, light stripes and green above? All that changes. I currently have mine set to pink with slowly moving hearts (Valentine’s Day, du’h) and a light spotted background. Just make sure to use it while charging; you don’t want to wake up to no clock and a dead Droid.

What apps am I missing out on? Have any favorites?