I’m not asking why you’re topless. Simply put, I don’t care. Maybe you were attacked by a flock of deranged pigeons* who only gorge on 100% cotton. Or, more realistically, you haven’t done a load of laundry in ten days, and you mistakenly assumed he’d know to wash your clothes with his clothes since they’re in the same hamper—even though you never expressed this opinion to him, and instead led him to believe that girl clothes are easy to ruin and he should never touch them. What happened doesn’t matter**. You’re without a shirt, and you must grab one of his, and it probably isn’t the same size as yours. What a predicament.

*This almost happened yesterday when a rogue pigeon practically attacked Lindsay and I while we were shooting outfit photos. But I can’t blame the bird; I have no shirts because I haven’t done laundry in forever. Whoops.

**Okay, it kind of matters if its the pigeon situation. Alert animal control, or at least post it on Twitter.

This mustard-colored buffalo plaid button-up shirt is one of Lance’s, and I stole it from his side of the closet. I could easily use the excuse that I didn’t notice it was his, as my clothes are slowly sneaking into his teeny closet nook, but I’d be lying. I love this shirt on him, which logically meant I’d at least like it on me.

For those following along at home, now’s the time when you raid his closet and find a shirt. Go for a plaid; if he doesn’t have a plaid, rethink your relationship. (Kidding… Okay, half-kidding. Boy, do I love a man who looks a little like a lumberjack. Lance’s wardrobe is a sea of plaids, and I’m in heaven.)

So, put the shirt on, button a few key (boob-covering) buttons, cuff the sleeves, and…

Are you wearing skinny jeans? Or—gulp—leggings? Try keeping it loose up top. Major perks: You don’t have to suck in your stomach. Your legs look really skinny. Sometimes you catch a nice breeze and your shirt ‘Marilyn Monroes’ a little, but you don’t care because you’re still wearing pants. 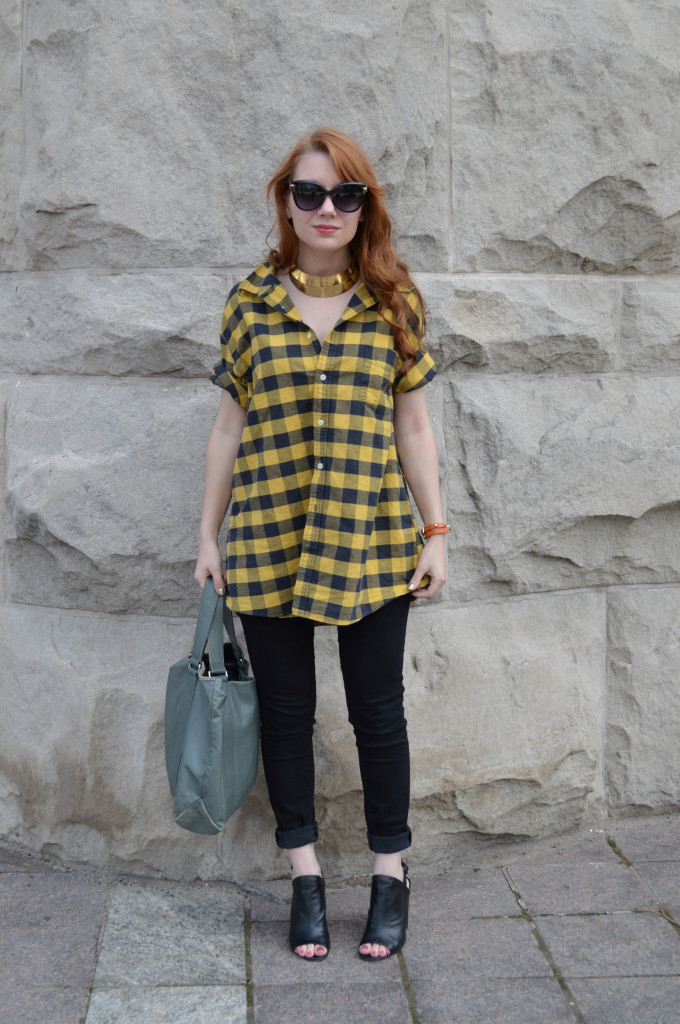 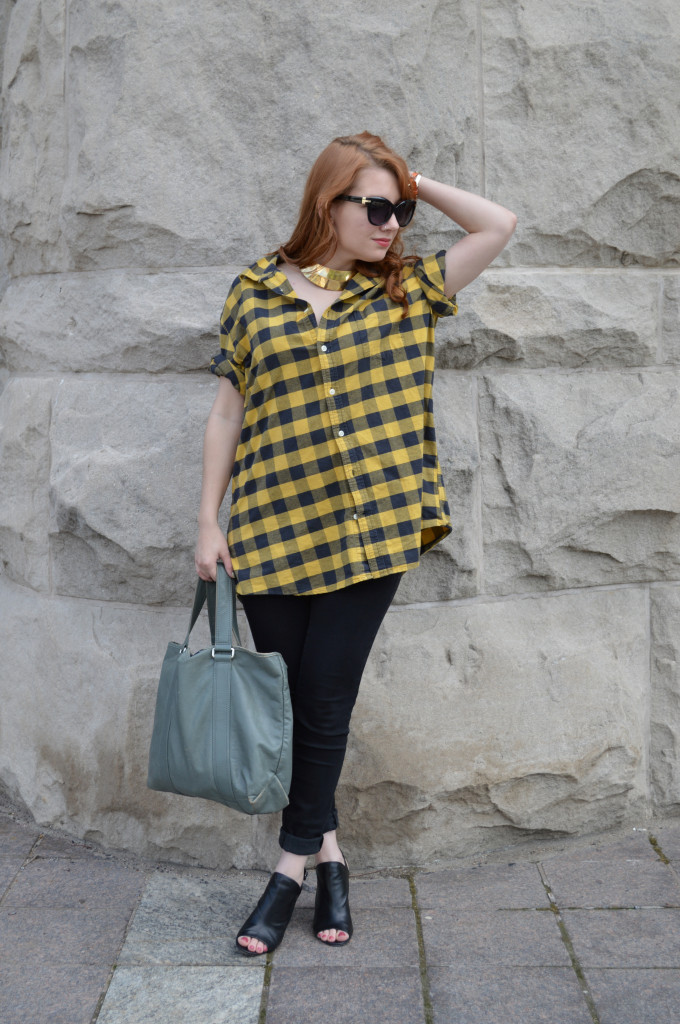 Too much of a wuss to let yourself be so wide? If you’re not feeling the tent look, you can…

Tie the bottom of the shirt into a knot. Unlike the style above, this one makes you remember your shape, which—depending on your day—you may or may not want. I like to keep mine about a half-inch above where my pants sit, but you can go higher or lower depending on your level of bravery. I practically chugged a drugstore glass bottle coffee treat before this photo, so no fully-exposed belly for me, thanks. (Or rather, you’re welcome.) 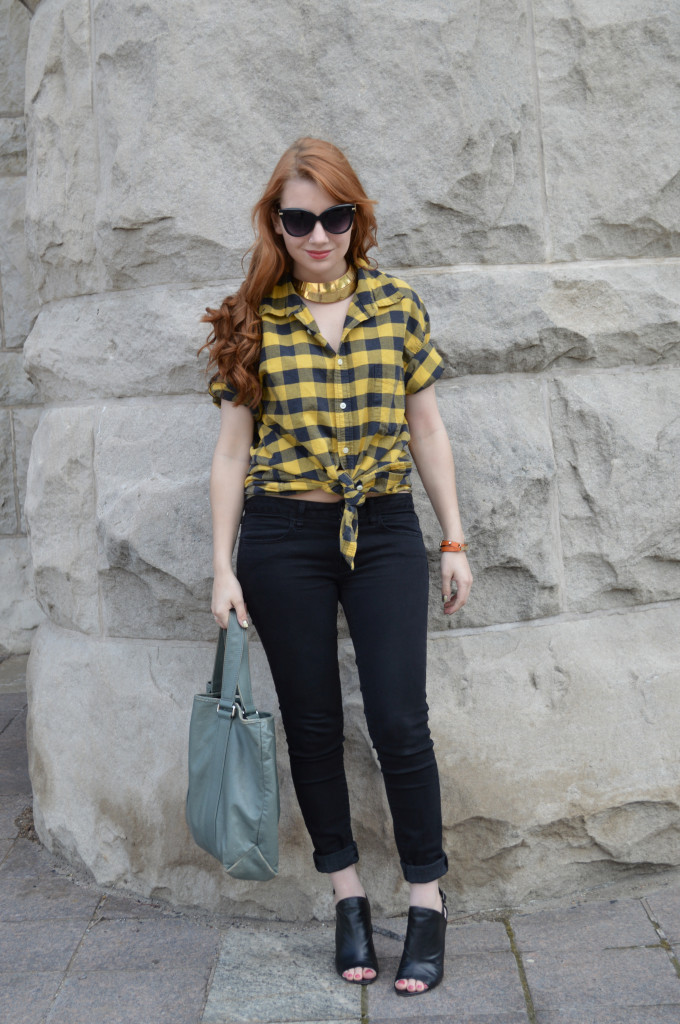 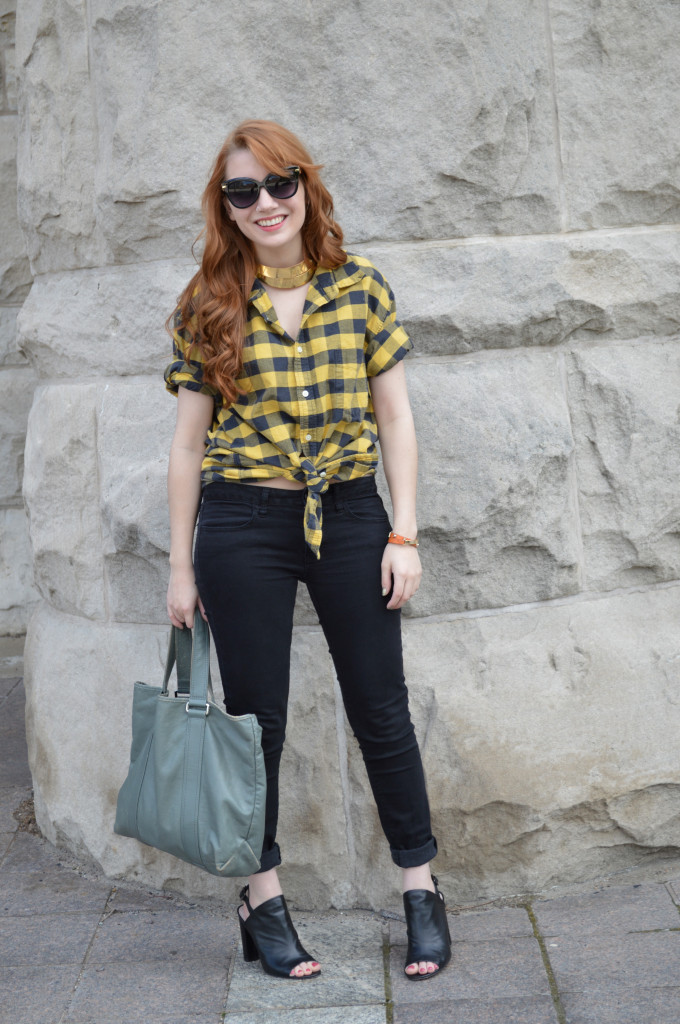 This knot not your thing? Instead, you can…

Okay, so this one is arguably the most flattering, and it’s super comfortable. Think of it like clothing origami. Take the two ends of the bottom of the (half-unbuttoned) shirt, and twist them over one another, like you’re making a wrap dress. Pull them  around you as far as they go without pulling too tightly. After all, this isn’t your shirt; you don’t want to stretch it. Tuck the ends into your waistband—these were tucked exactly where my hands would go if I were to put them on my hips—and fluff the rest of the shirt so it hangs right/doesn’t leave any stomach exposed. Ta-da! Your boyfriend’s shirt fits your feminine physique, and you’re no longer running around topless. 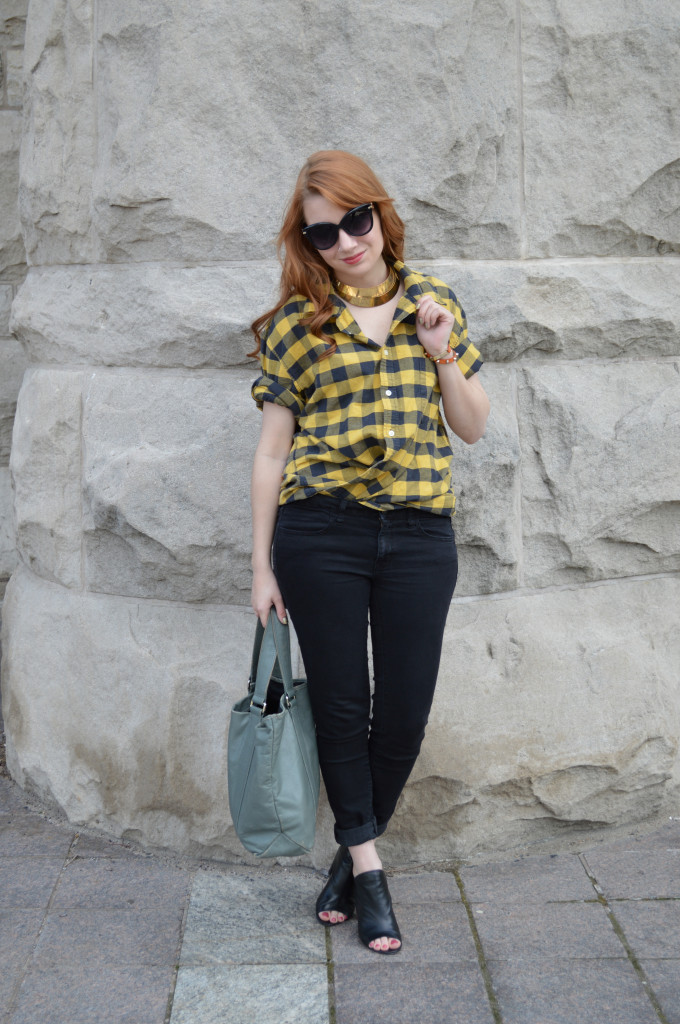 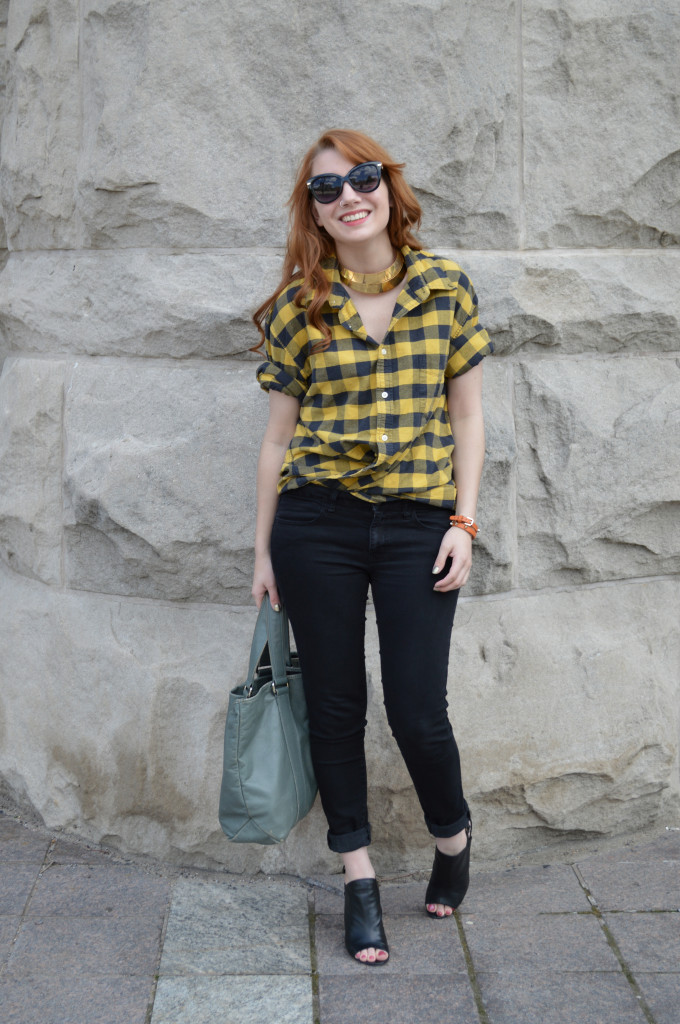 Here’s hoping he had a different shirt to wear.

PS: Huge thank-you to Lindsay of Heartland Underdog, who shot these photos for me. More photos from my very-blogger-Saturday with Lindsay, Rachael, and Latoya coming soon.