Forget dinner and a show– I’ll take film screenings and fashion any day. Earlier this week I was invited, along with other area bloggers and fashion professionals, to view an early showing of the new documentary Scatter My Ashes At Bergdorf’s at the Plaza Frontenac cinema. 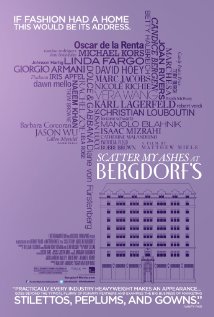 Scatter My Ashes At Bergdorf’s Poster | Image via IMDB

The flick. Scatter My Ashes At Bergdorf’s is a documentary film based around the concept that NYC’s Bergdorf Goodman is the department store of all department stores. And to think, you thought you knew where fashion sits..

Assuming you watched the trailer, you know the interviews are a list of all it-girls (and guys) in fashion. However, they range from the lust-worthy designers all the way to reporters and store clerks; b-roll highlights both the intense history and outlandish modern events. The documentary runs in at a normal 93 minutes, according to IMBD. I found it a little long, but it wasn’t some kind of exaggerated ending– instead, I found that each segment could have used a minute or two shaved off. One less frame of McQueen’s MET exhibit. One less line from rejected designer masking desperation. One less lengthy stare from a fashion icon trying to find the words to make a point that has already been made.

Questionable editing came into play here, and it’s honestly a shame. If the (merely) visually pleasing aspects had sped up a bit, perhaps there could have been a little more focus on the truly interesting scenes: the taste-makers with keys to the place, the history of the family, the meticulous details accounted for in the legendary window displays.

Speaking of the window displays, the film’s focus on the creation of these art installations was a nice touch. Hearing about the glory and glam of a beyond-expensive store was grounded by the physical work of making it beautiful.

Another favorite? By focusing on the store’s employees, as opposed to simply designers, the film felt well-rounded and exclusive. I can open a magazine if I want to see the Olsens or Rachel Zoe; while they were a great and needed part of the film, listening to and focusing on the people who lock up shop was informative and believable.

I found the ending (spoiler alert, but it’s a documentary, so there isn’t much to spoil) sub par compared to other aspects of the film. The store is now owned by Neiman Marcus, as opposed to the namesake family; that detail was thrown in via pre-credits text. This is a smidge ironic, as I think a parallel can normally be found between openings and closers; while I enjoyed the opening concept and footage, it was longer than it should be. Couldn’t a moment more be spared to explain that the shop was lost? ‘Documentary’ should not read like ‘promotional video’.

Overall, I truly enjoyed the film. My main criticism is that there was too much focus on the wow-factor and not enough on the inner-workings. The narration of William Fichtner almost dissolves this issue, as I thought he was a refreshing choice of voice. If you can cope with a few painfully-showy moments, the behind-the-scenes segments are worthwhile. I’d watch it again for that feeling of fashion inspiration, but I’d play with my phone during a few parts.

Scatter My Ashes At Bergdorf’s, directed by Matthew Miele, is showing in select theaters. Learn more about the film and the book here.

The food. The food was not provided by the film, but instead available for sale from the theater– you know, like any other movie. And it was the worst popcorn ever. Ever. Sorry Plaza Frontenac. With the kind of rent you must bring in from stores like Louis Vuitton and Tiffany & Co., buy a commercial-grade popcorn maker.

The friends. Not only did I get to bring my amazing friend Sara– who I wish I had photographed, as that girl looked spectacular in a flea market-meets-Parisian ensemble– but I ran into a few of my favorite bloggers. 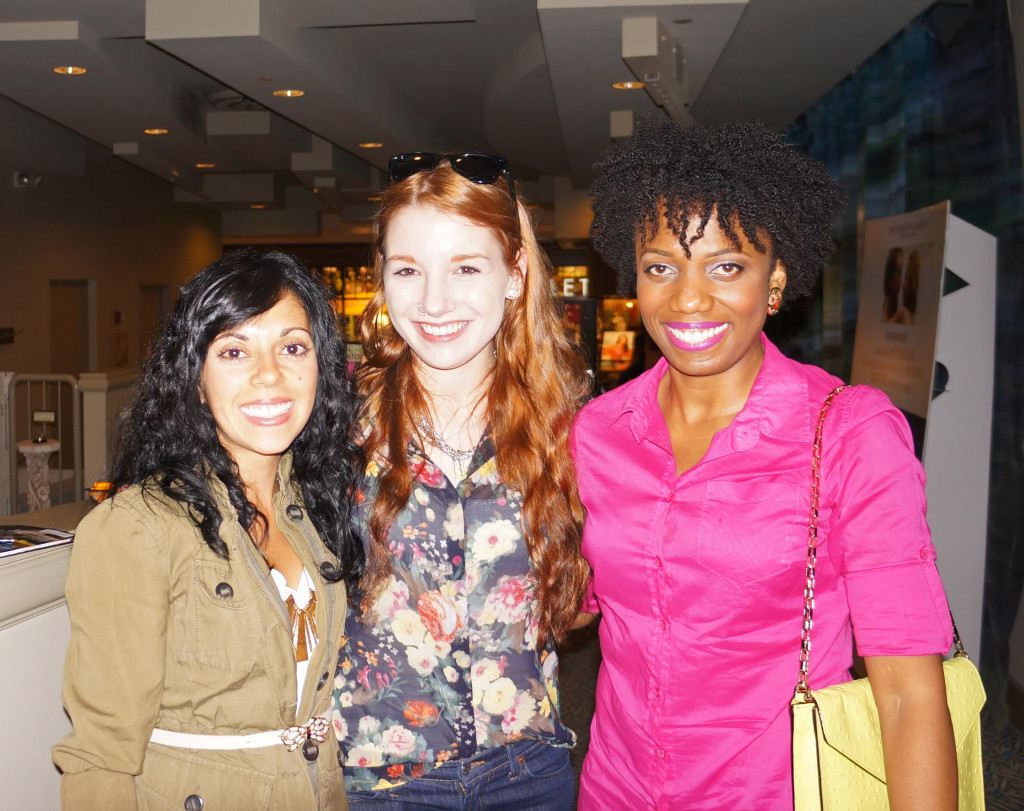 Note: If you still haven’t checked out their blogs, you’re missing out. Lorena, on the left, writes Garnets and Sapphires; Psyche, on the right, writes Economy of Style.

The fashion. I’m obviously not spoiling much when I say this movie was all about fashion. The theme continued, as our cup holders had a few fashionable freebies, including Jo Malone perfume from Neiman Marcus and bracelets gifted by St. Louis style blog Heartland Underdog (who, midst fashion articles, has been posting a lot about her new loft, should you be as much of a design junkie as I am) made by brand BelleStyle Bijoux. 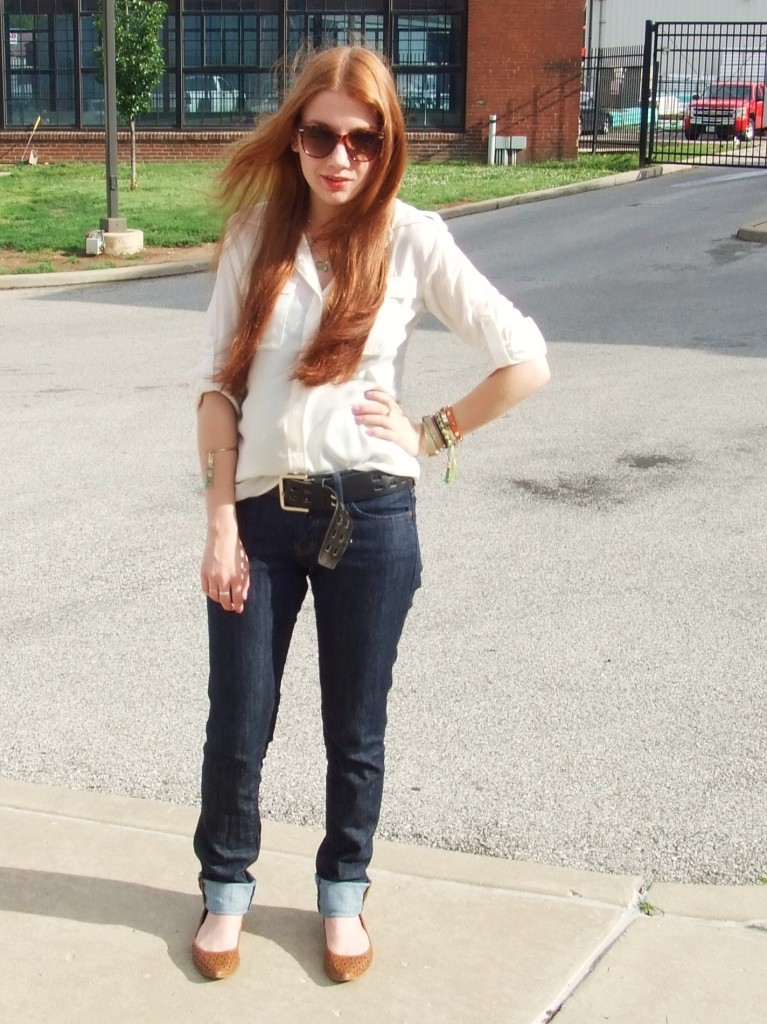 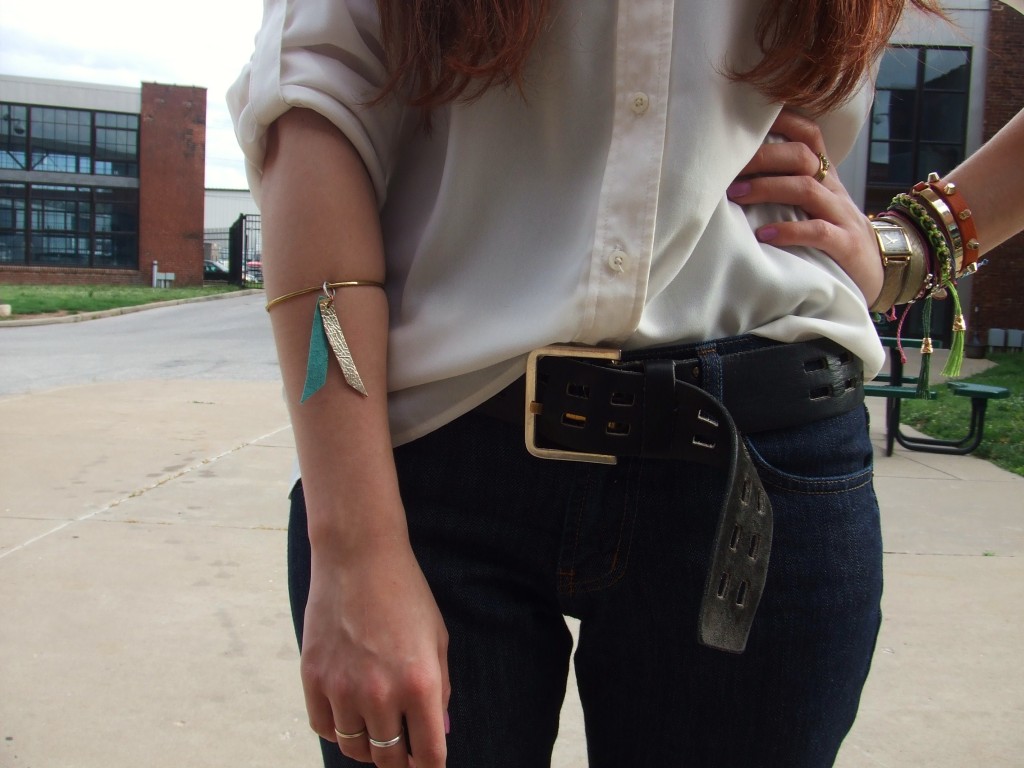 Don’t you adore that dangling leather look? I love it so much, it’s actually not my first one (due to my own clumsiness and occasionally chaotic day job), but I couldn’t imagine not having it as my newest summer accessory. Pushed up on the forearm, the two strips add interest and a hint of bohemian flair– and a slight tickle, but it’s worth it.